A downloadable synth for Windows

It's a spreadsheet. You can add values to cells, ask it to average a range.

It's a synthesizer. You can ask it to generate a sine wave based on time, and output it through your speakers. Add an ADSR envelope, modulate the frequency based on MIDI input note, put in some filters and hey, it's an actual instrument.

Want to control something with a slider? Just add slider() to your formula, and a slider pops up. Same goes for buttons, toggles, graphs, fft:s.

Want to control something with your midi keyboard? Just add calls to midipot, midinote, midinoteon, midival.

Want to take audio in and modify it with Sassy in real time? Just call add in().

Sassy is currently in beta, and further progress depends on feedback. Join on in and come talk with other beta testers at https://discord.com/invite/7SucFxW32n

1.8 Beta hilights:
- Mother of all wavetables: the whole AKWF waveform library under a single function
- Hexwave, AY and SID synths
- Fixes and tweaks

Note that this is beta, and while it's pretty well tested, anything can happen.

THE SOFTWARE IS PROVIDED "AS IS", WITHOUT WARRANTY OF ANY KIND, EXPRESS OR IMPLIED, INCLUDING BUT NOT LIMITED TO THE WARRANTIES OF MERCHANTABILITY, FITNESS FOR A PARTICULAR PURPOSE AND NONINFRINGEMENT. IN NO EVENT SHALL THE AUTHORS OR COPYRIGHT HOLDERS BE LIABLE FOR ANY CLAIM, DAMAGES OR OTHER LIABILITY, WHETHER IN AN ACTION OF CONTRACT, TORT OR OTHERWISE, ARISING FROM, OUT OF OR IN CONNECTION WITH THE SOFTWARE OR THE USE OR OTHER DEALINGS IN THE SOFTWARE.

That would require a massive investment on my part.

how to link other software?

Just going to add on to the desire for a mac version, but it's too cool not to have either way - so I'll buy it and hope.

I see the comment on the Mac version below.  This software would be awesome for Macs as well.  I notice it already has synthesis not found in Renoise, which I use on my Mac.  I am betting it can do granular as well (or will soon be able to).  This would be excellent for making all sort of music.  Keep at it, and I hope for an OS X version.

Note: beta 1.2 package re-uploaded. The 800kB zip only included the executable, which DID work, but the re-uploaded zip also includes example files, changelist and sdl2.dll..

This is great, I love it!  I haven't had time to play with it but I think I am going to have a lot fun with it.  This reminds me of a Lisp (?) based GUI tool for sound generation, used to tinker with it and make bizarre sounds for my games! 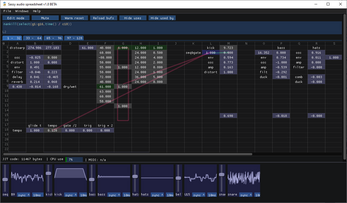 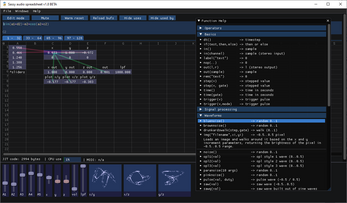 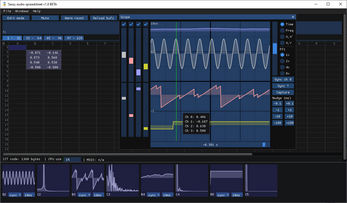